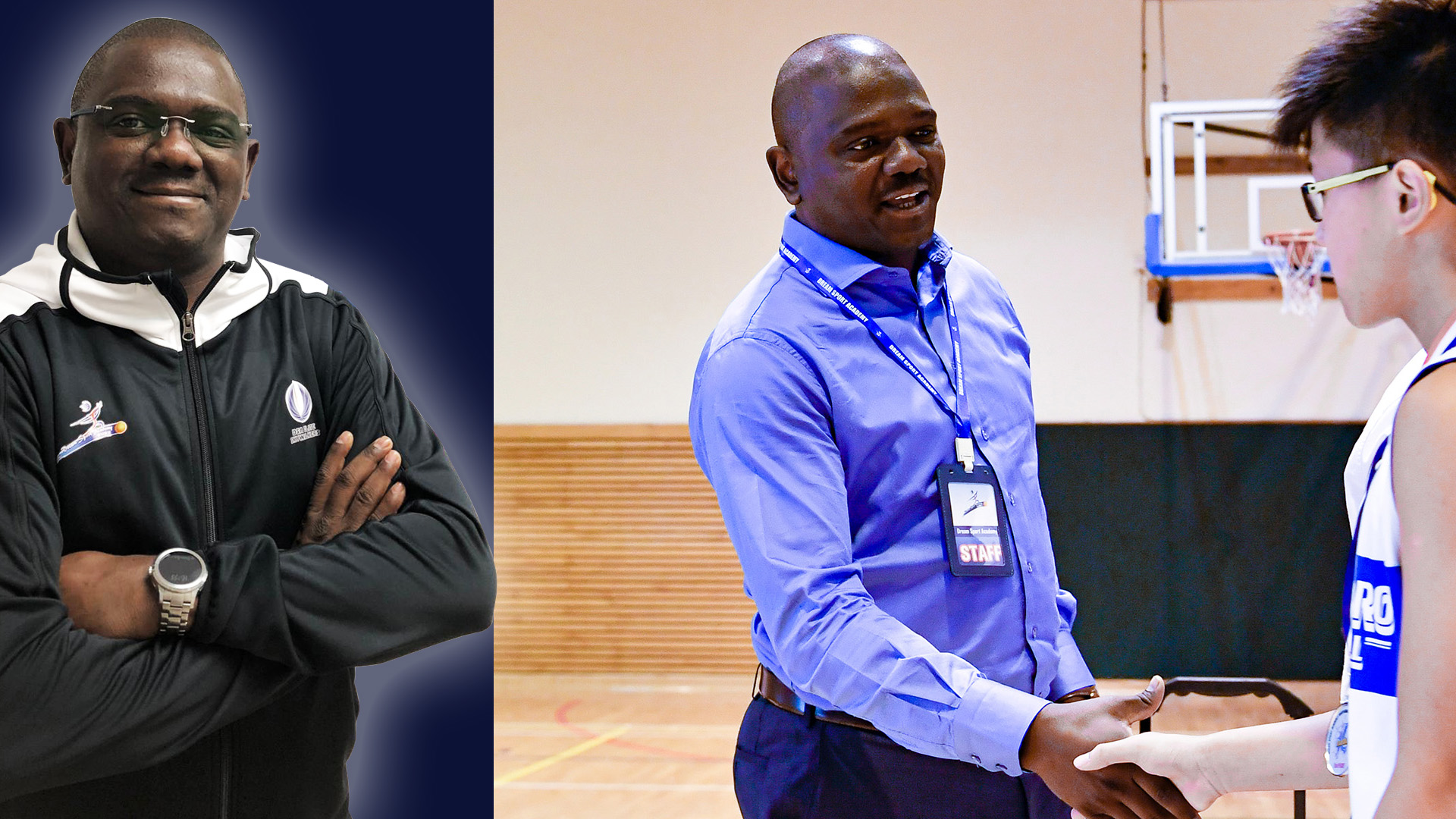 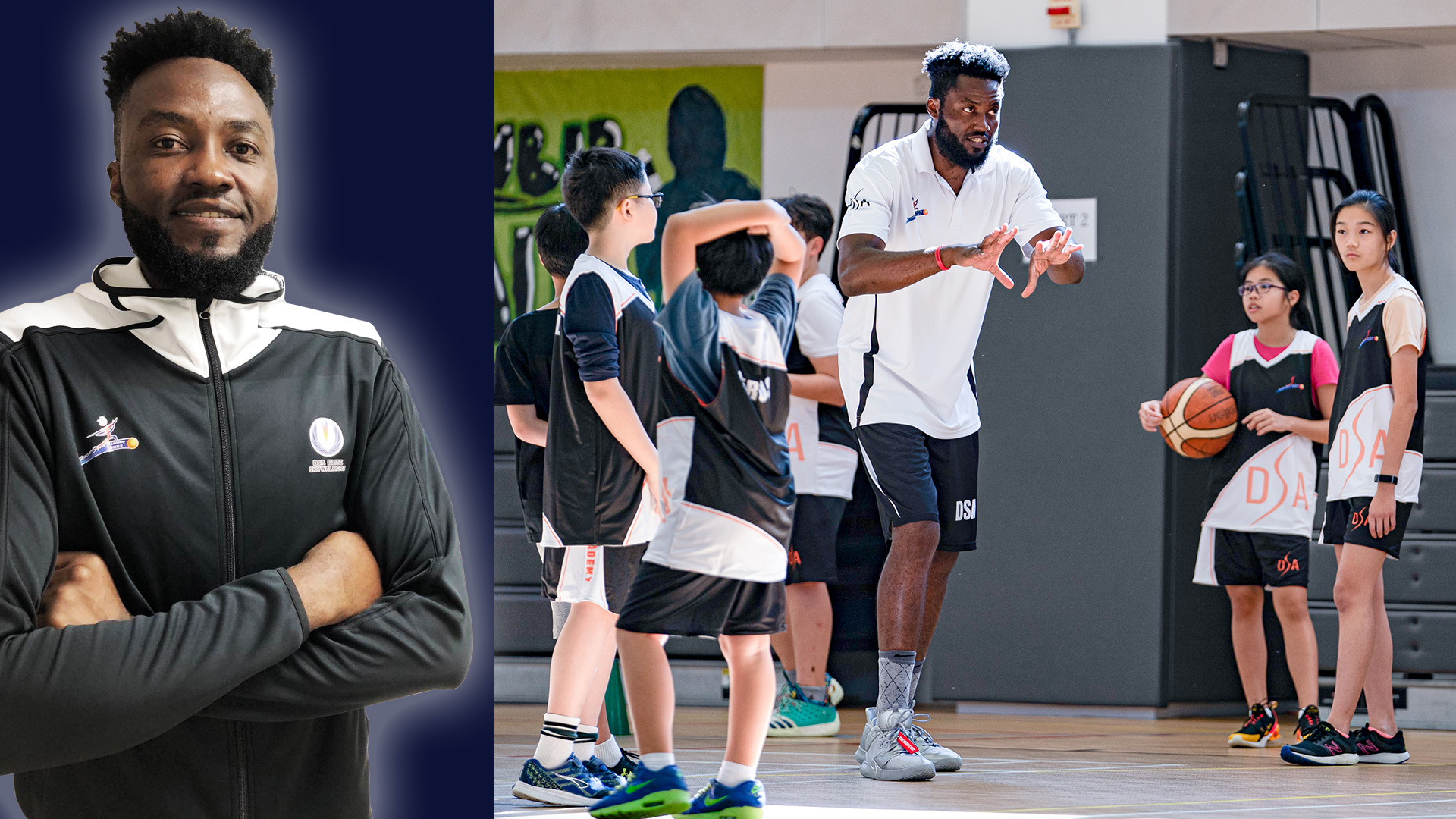 Coach Joe is 31 years old, originally from Cameroon. His favourite sport is Basketball because it impacts his life and existence in a positive way. His favourite basketball player is Lebron James. Coach Joe became a coach because he wanted to share his knowledge he acquired as a professional basketball player. He has coached for over 7 years with multiple basketball academies and has been working with DSA for over 2 and half years - in the Philippines, Thailand and Hong Kong. He has worked with multiple international schools and also coached multiple Junior NBA clinics and camps in both the Philippines and Thailand.

Coach Joe enjoys the challenge and responsibility of coaching children at DSA. He loves working with the students to facilitate their growth as basketball players and responsible individuals. Coach Joe believes that DSA is a great environment for anyone that wishes to learn basketball in a professional setting, combing both fun and competitive training for children and young adults. Joining DSA will allow students to acquire life values that will help you in the future as an adult and active member of society. 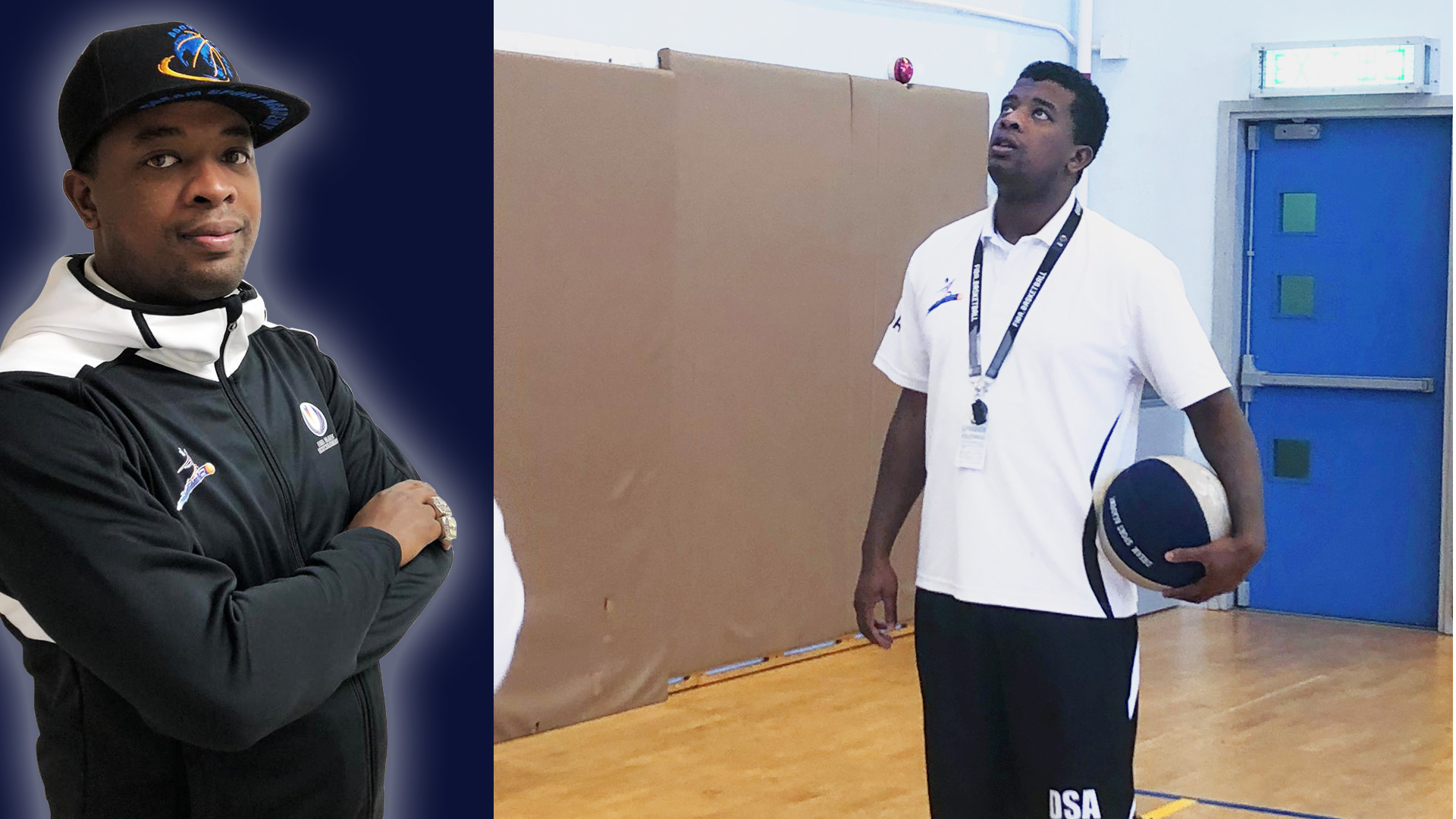 Coach Keith is 29 years old, originally from Albany Georgia in USA. His favourite sport is basketball. His favourite basketball team is Toronto Raptors and his favourite player is O’Darien-Bassett. Basketball has been a tradition in Coach Keith’s family. His Dad ‘David Bailley is a retired basketball coach with multiple National Championships so he has always watched him from a young age. Coach Keith’s passion for Basketball is evident in his coaching. He has been a coach for 8 years and arrived at DSA in December 2019 to help our students improve their skills. Coach Keith chose DSA because he loved the fact that kids train and travel to different countries to play basketball. He loves that Dream Sport Academy has a unique focus of teaching basketball and football to children and guarantees to improve skills through intensive and professional training. 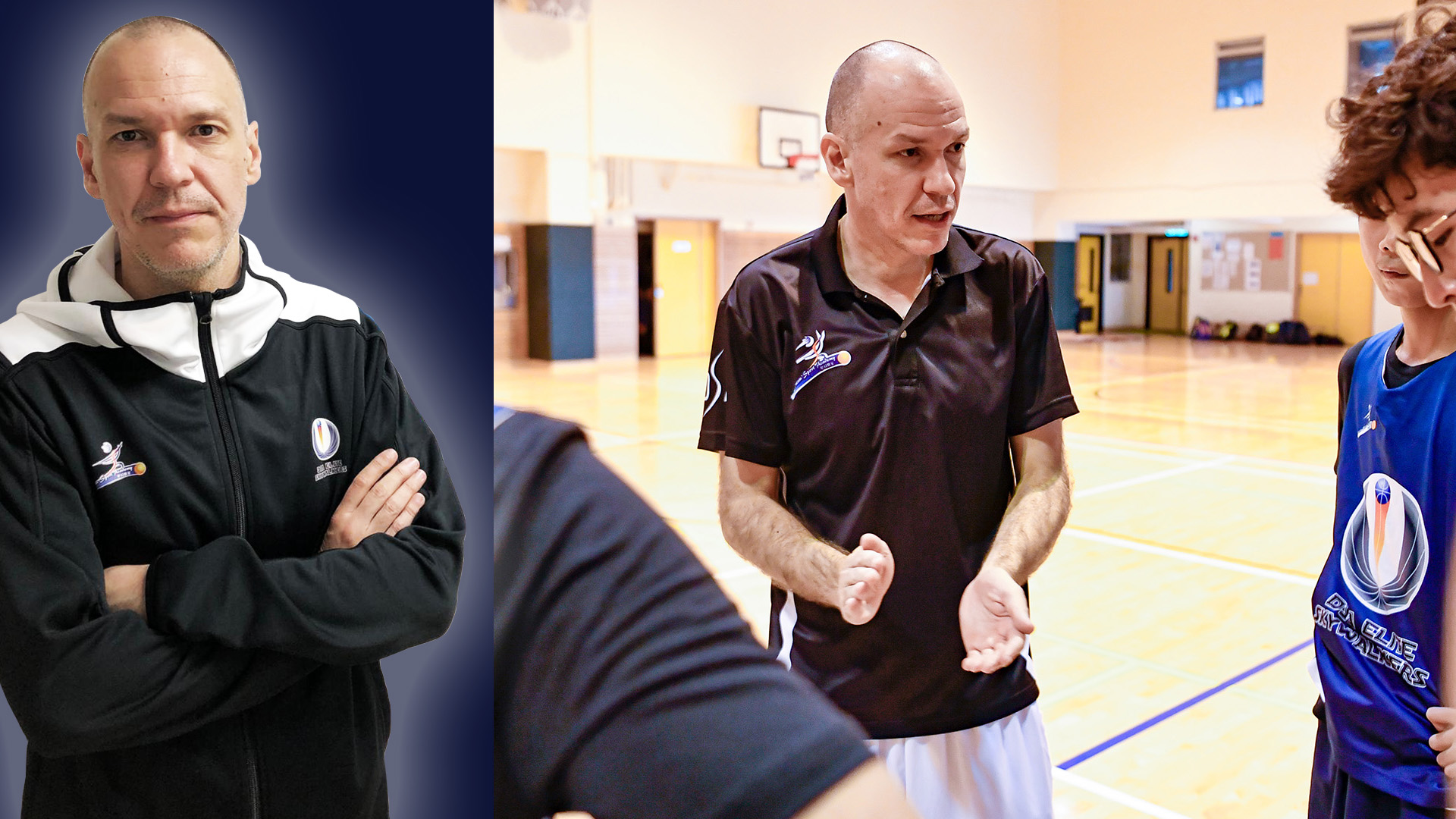 Coach Stankovic Nedeljko is 39 years old, originally from Serbia. His favourite sport is basketball and his favourite team is Partizan Belgrade. His favourite players are Aleksandar Djordjevic, Milos Teodosic and Vlade Divac. Coach Stan always wanted to become a basketball coach because he always wanted to teach others the beautiful game. Coach Stan has been a Basketball Coach for 15 years after having received his FIBA coaching license and has been coaching with DSA for 1 and half years. Before coaching with DSA, he coached OKK Belgrade, Red Star Belgrade, KK Astra and SKK Zvezdara. Coach Stan has always appreciated the commitment and hard work from all his colleagues at DSA. Coach Stan would like to encourage anyone to join DSA! 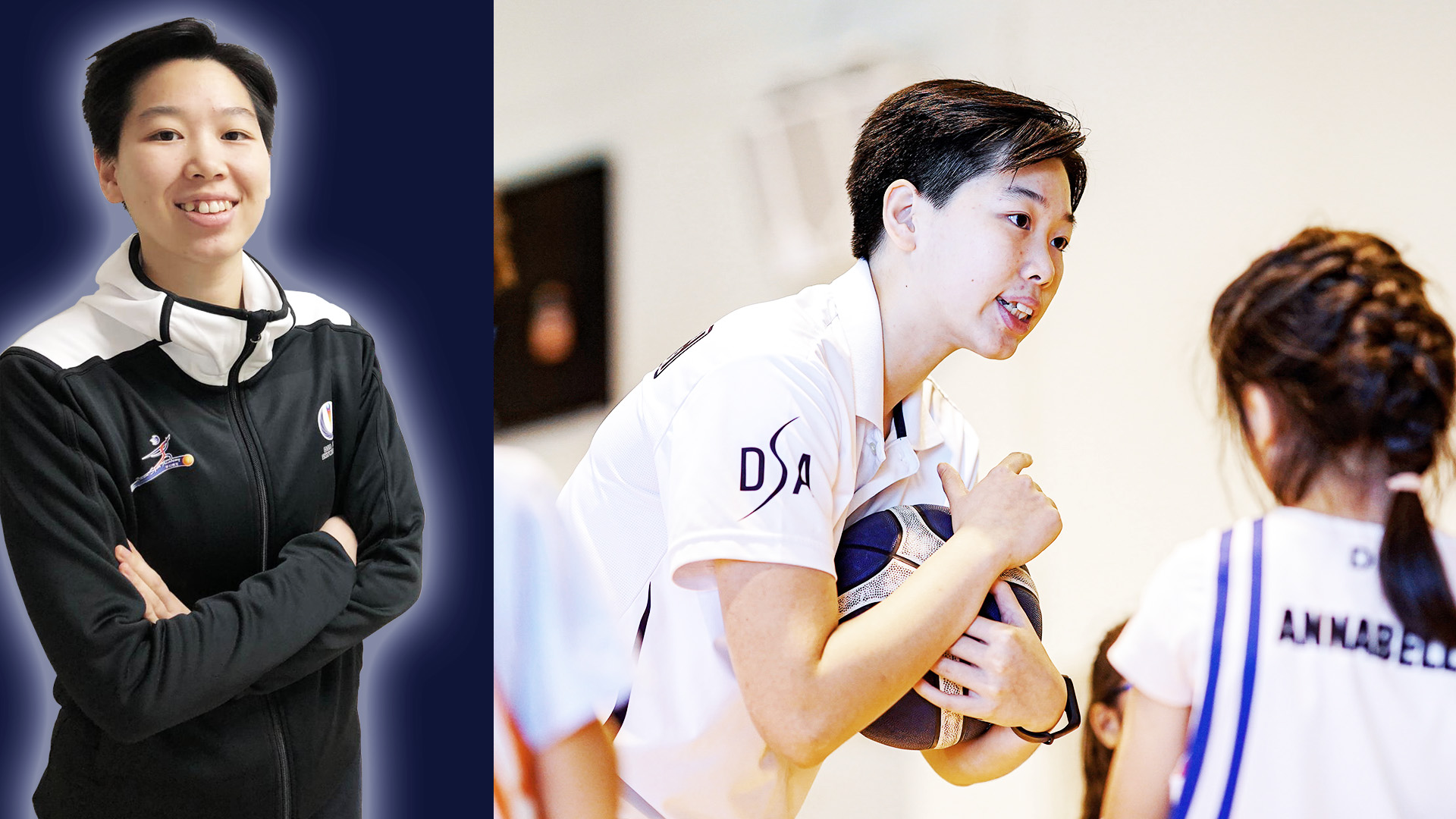 Coach Karman beleives that DSA provides the best basketball training to children aged between 5 and 18 years old. DSA develops the knowledge and ability of all members through advanced sports coaching. Do not hesitate to join! Experience our fun Basketball and Football coaching today! 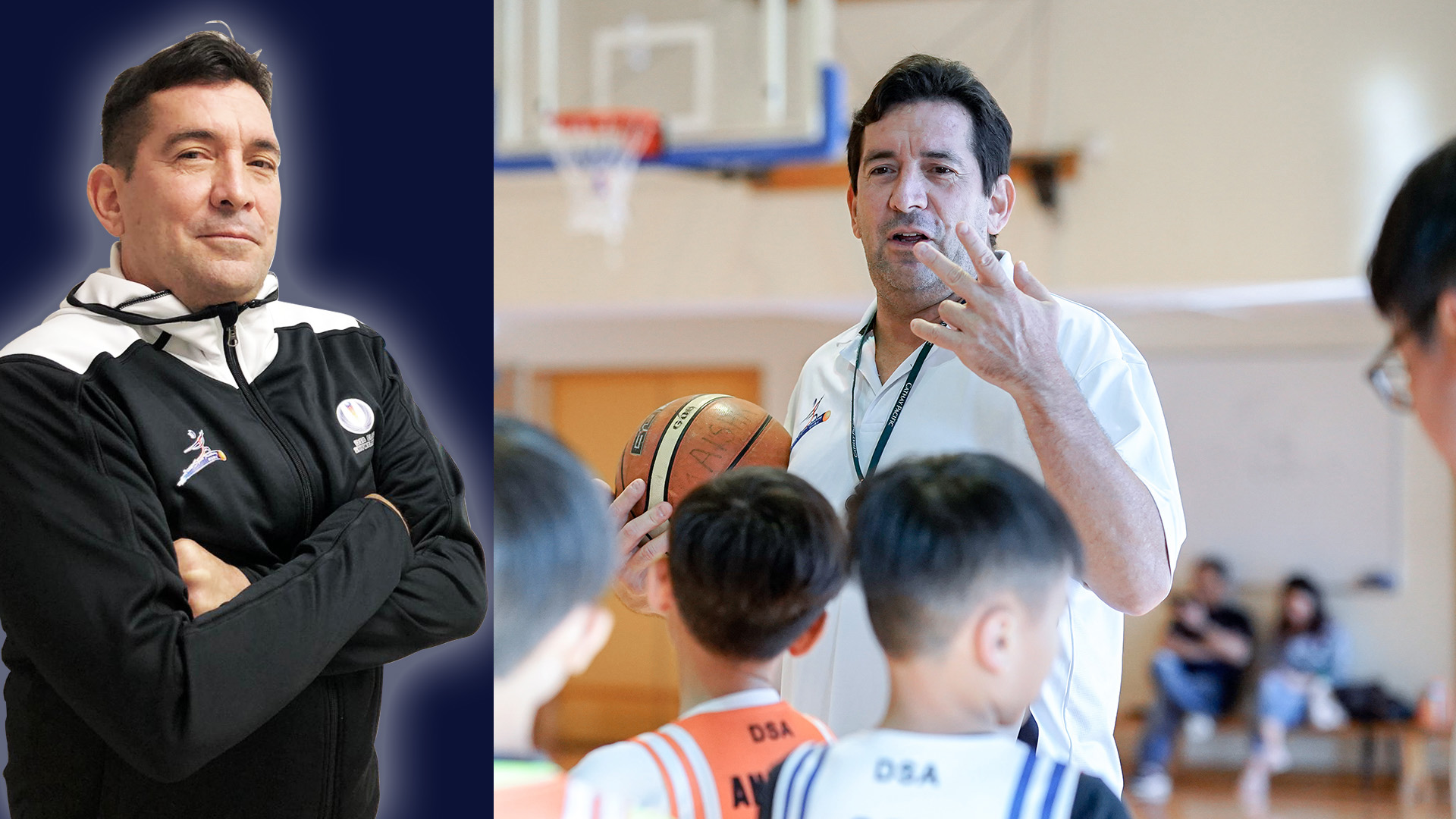 Coach Boris originally from the USA and his favourite sport is basketball. His favourite team is Miami Heat and his favourite player is Michael Jordan. For over 5 years, Coach Boris has lead the development of the junior basketball players that have trained with DSA. Originally hailing from Miami, Florida, U.S.A., he has trained a large majority of DSA students at one time or another, as all junior students must pass through his classes in order to make it to the higher levels of the Academy. For many students, Coach Boris is the first face they see when joining DSA, and his high-level training is the first proper training they receive on their basketball journey. 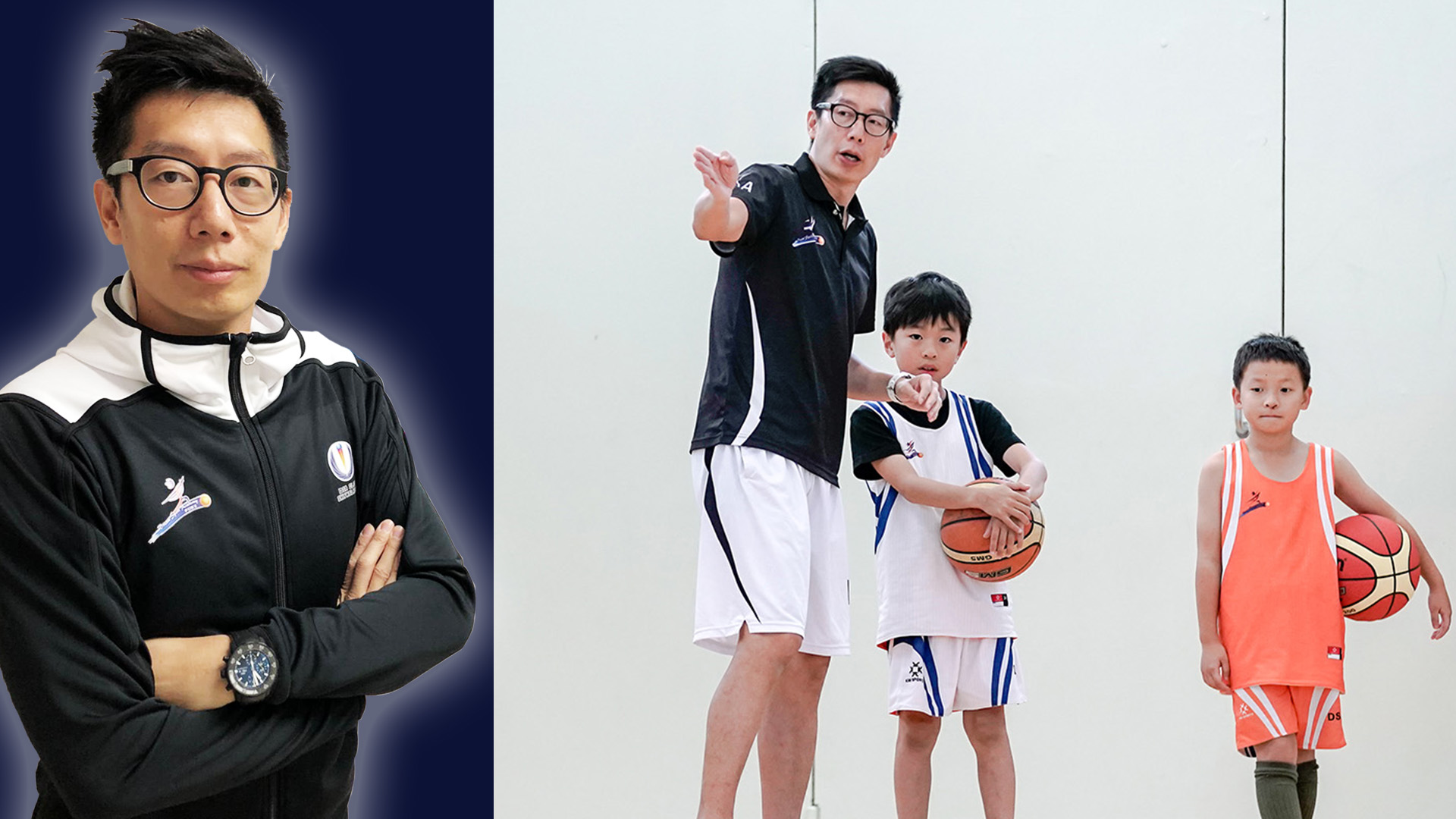 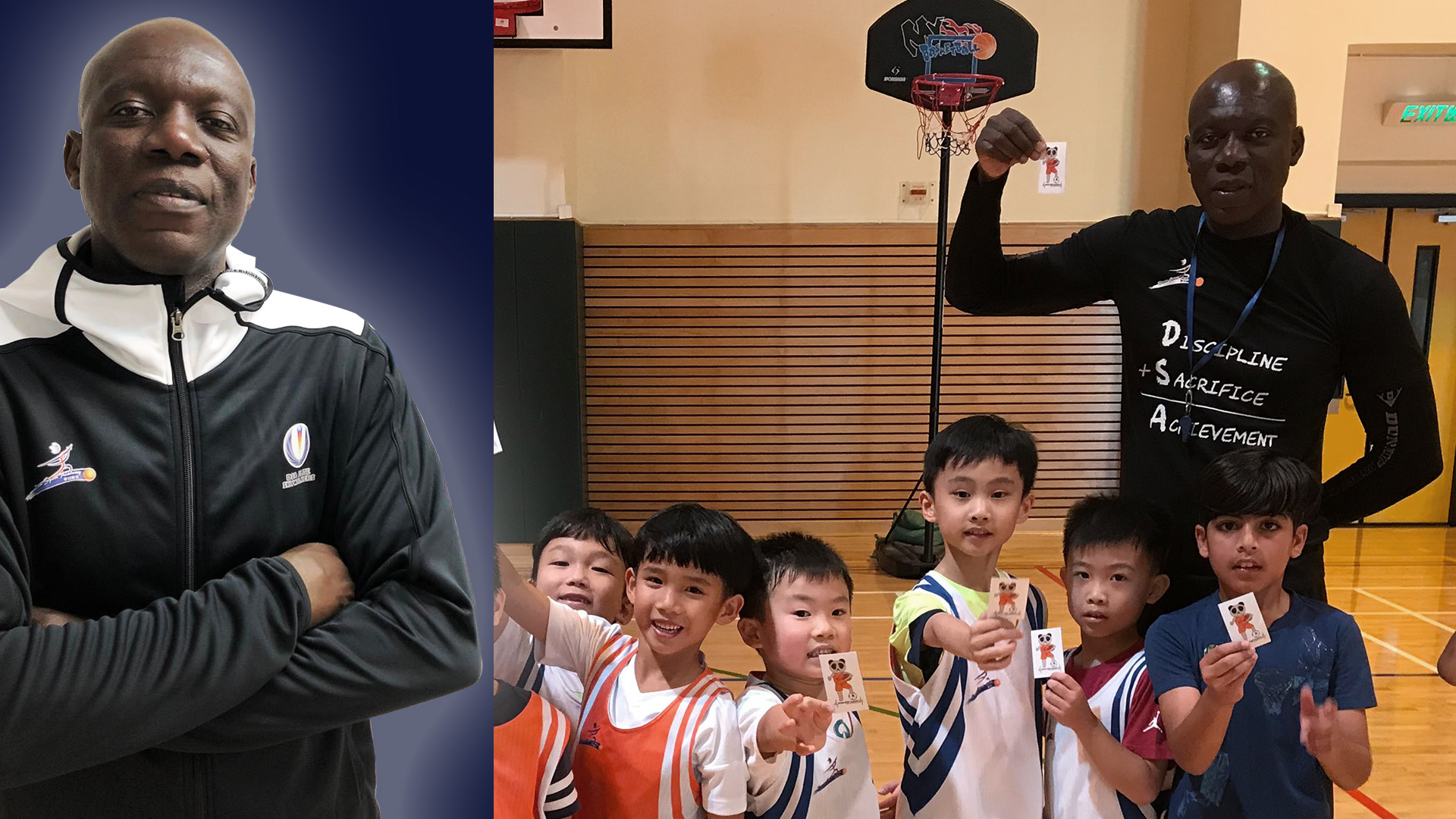 Coach Seydou Sogodogo is 40 years old, originally from the Ivory Coast. His favourite sport is basketball. His favourite basketball team is the LA Lakers and his favourite player is Karim Abdoul Jabbaa. Coach Sogo has been a coach for 4 years now and enjoys sharing his passion for basketball with the younger generation. Coach Sogo is experienced coaching 3 - 14-year-olds.

Coach Sogo enjoys seeing students professionalism and enthusiasm when teaching in Hong Kong. He believes that DSA is one of the most established Basketball Academy in Hong Kong surrounded by great coaches. 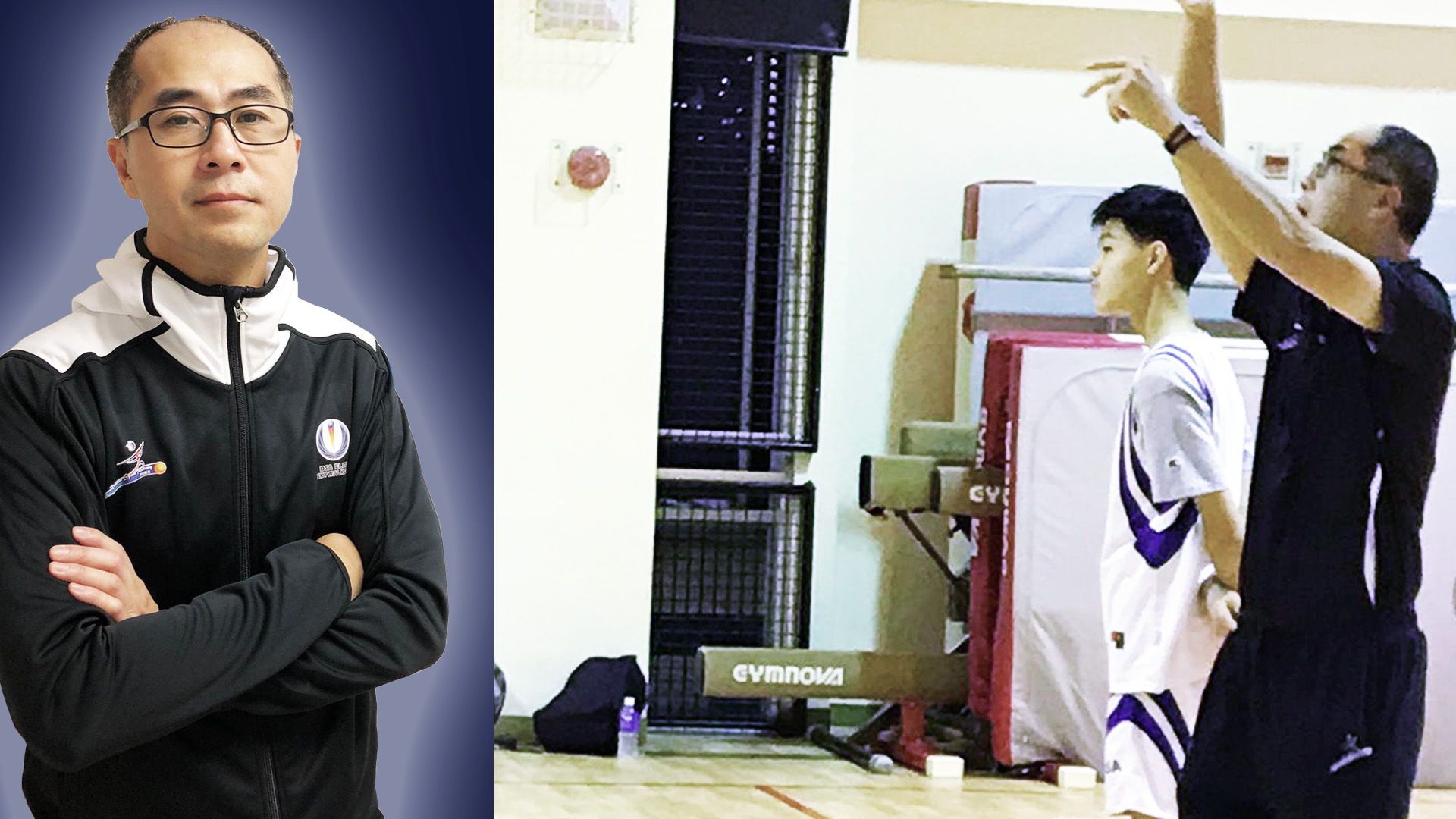 Coach Kolman is originally from Hong Kong and his favourite sport is Basketball. Coach Kolman is well known of his professionalism in class management, drill designs and run-down arrangements. In addition, his strong passion in coaching is reflected in the classes. With a strong coaching technique, he has been one of the most important coaches with Dream Sport Academy. With him being a member of the coaching board at the DSA, we are confident that he will continue to give his support to the academy and especially bringing his knowledge for the good of this sport. 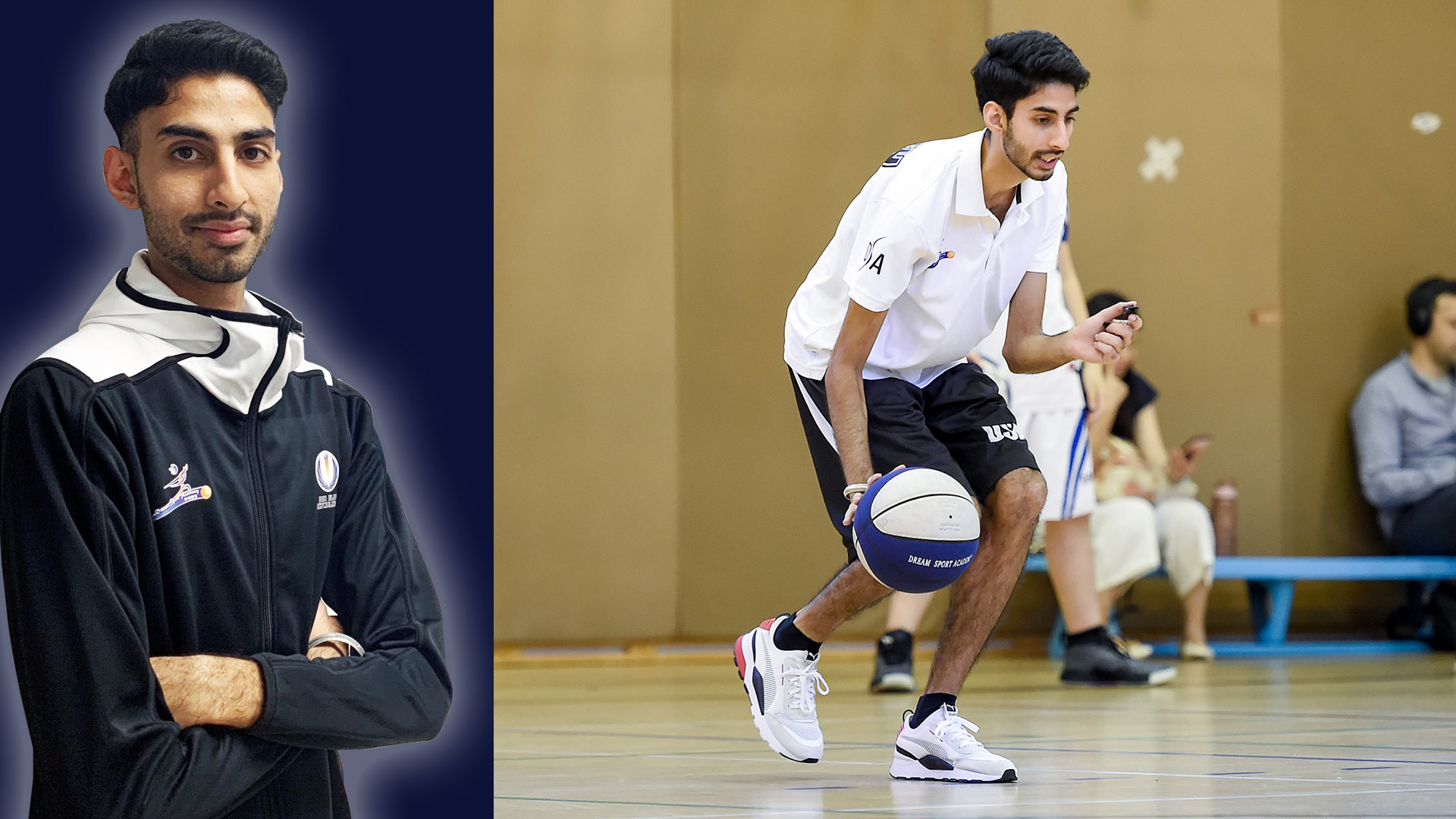 Coach Kamal always wanted become a basketball coach because he is passionate teaching children his skills. Coach Kamal started to teach basketball to children at a very young age and passed his Sports Coaching Degree at the same time. Coach Kamal has been coaching with DSA for 3 years. He has always appreciated the management and organisation of DSA. Coach Kamal would like to advise people interested in joining DSA to b confident and willing to work hard. 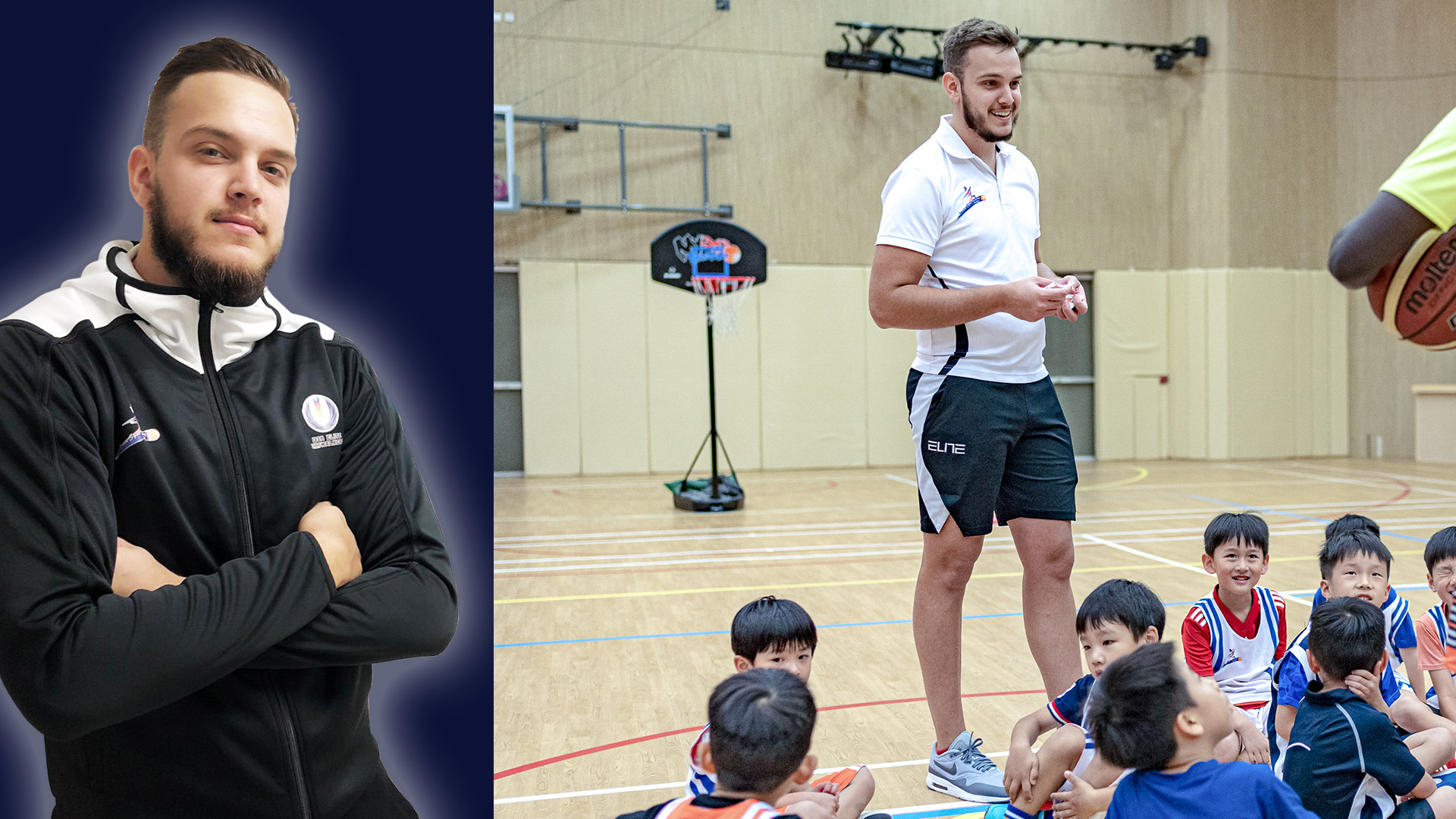 Coach Faris Husic is 22 years old, born and raised in Bosnia. His favourite sport is Basketball. His favourite team is Phoenix Suns and his two favourites players are Novica Veličković and Artsiom Parakhouski. 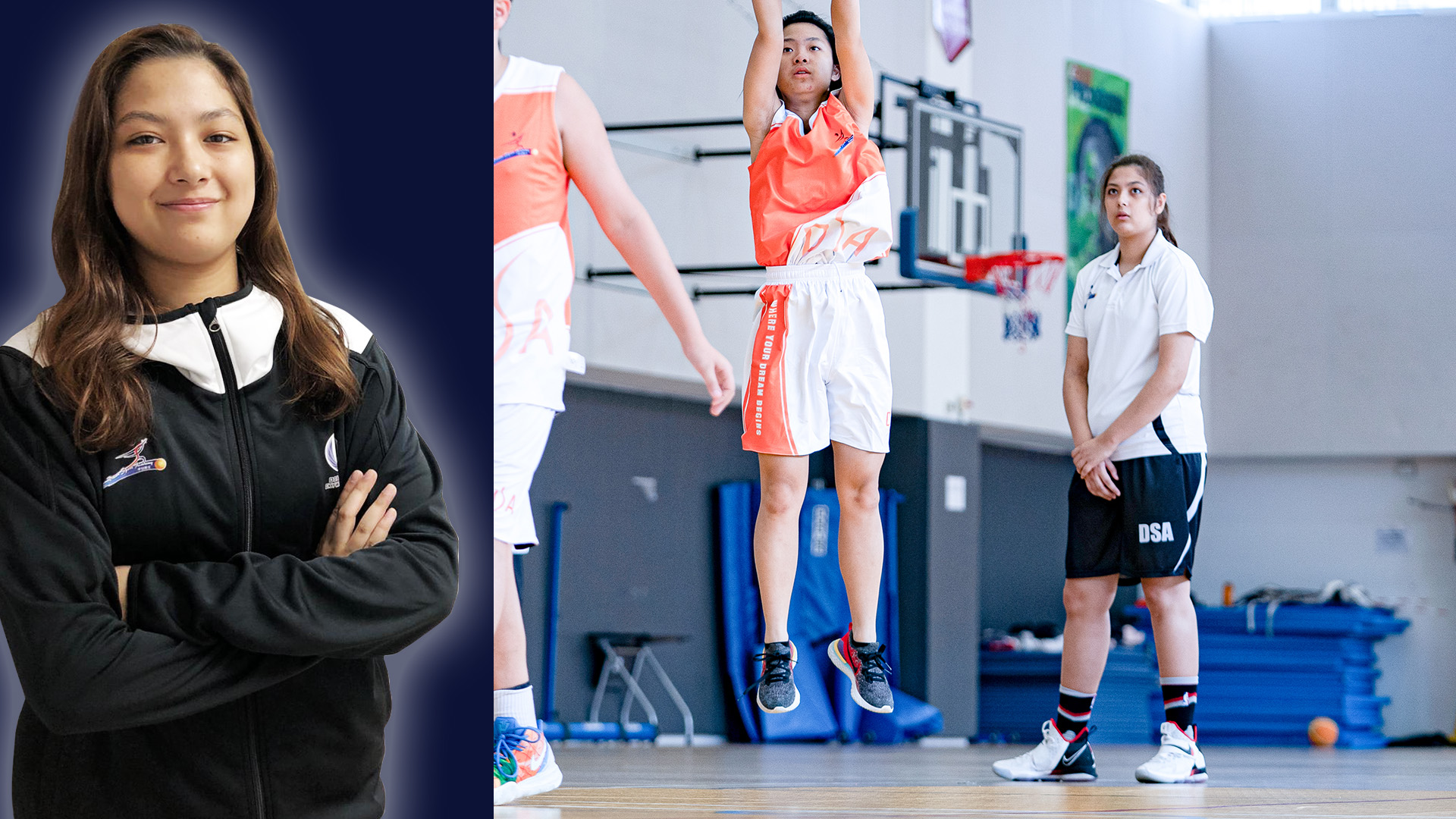 Coach Stables Victoria Jessica Estrada is 20 years old, Hong Kong born, half British and half Filipino. Her favourite sport is basketball. Her favourite basketball team is Golden State Warriors and her favourite player is Luka Doncic. Coach Jessie was lucky enough to be taught by some of the best coaches in Hong Kong and would like to pass on her skills and wisdom of basketball to others. Coach Jessie has been a coach for a little over a year and has been a coach with DSA for 3-4 months.

Coach Jessie enjoys working as a team and experiencing first hand the results of training hard together. She believes that the coaches at DSA are very easy to work and are all amazing at what they do. Her advice for anyone thinking of joining DSA is that the first step to success in sport is to face you challenges head-on and learn from making mistakes. 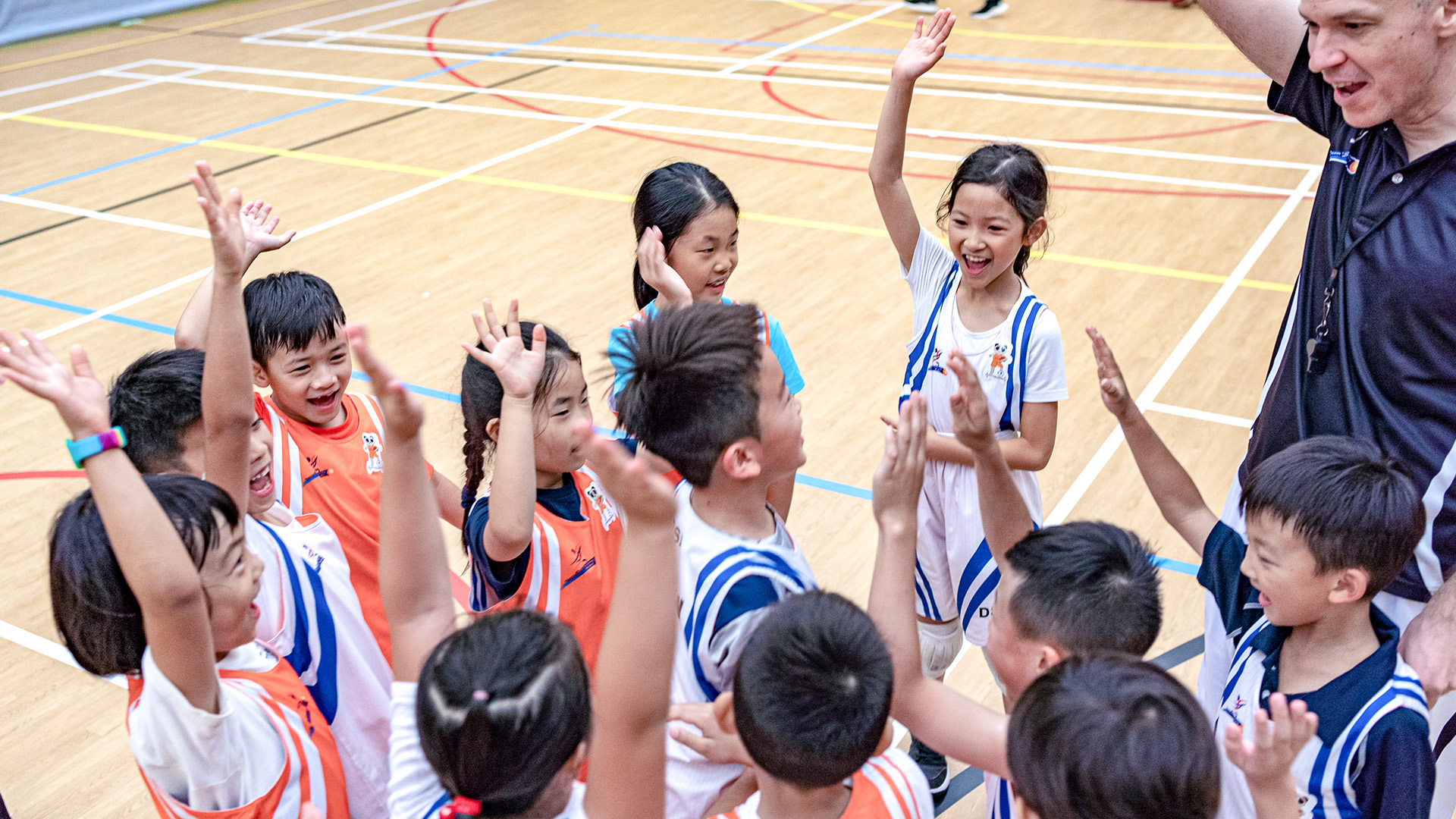